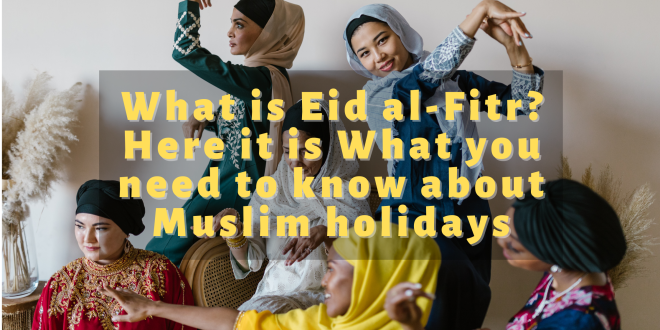 what is Eid al-Fitr? Here is What you need to know about Muslim holidays

what is Eid al-Fitr? Here is What you need to know about Muslim holidays – Eid al-Fitr is the day that Muslims have been waiting for after carrying out the fasting worship of Ramadan. Fasting in Ramadan is God’s commandment to mankind to strengthen faith, care about society, and love the universe more.

Eid has many meanings. Reporting from Raw story, the meaning of Eid is literally a festival or celebration.

In the Islamic calendar or Qomariah there are two holidays, namely Eid al-Fitr and Eid al-Adha. Eid is usually held for three days while Eid al-Adha is usually carried out for four days or major holidays.

Why are Islamic holidays held twice a year?

There are two different events that set the background for the two holidays in the history of Muslims.

Eid al-Fitr means the feast of breaking the fast, fasting is obligatory for Muslims for one full month from sunrise to sunset. In addition, to commemorate the revelation of the Koran to the Prophet Muhammad.

How do Muslims celebrate Eid al-Fitr?

Eid celebrations will last for two to three days, where in the morning on the first day of Eid Muslims will perform Eid prayers. At the same time, Muslims will wish each other a happy Eid with handshakes and formal hugs.

It doesn’t stop there, sweet dishes and gifts are often given to children and those in need.

Muslims on the day of Fitri will forgive each other. These traditions will vary from country to country.

Banyak diminati:  You are Moslem? How is it Legal to Eat Food in Non-Muslim Majority Areas

In many countries with large Muslim populations, Eid al-Fitr will become a national holiday. Schools and offices will be closed so that during the holidays Muslims can gather with their families, friends and neighbours.

In the United States (US) and the UK, Muslims can request time off from school and work so they can travel or celebrate with family and friends.

In countries such as Egypt and Pakistan, Muslims decorate their homes with lanterns, twinkling lights, or flowers. Special meals will also be served, friends, neighbors and extended family will be invited to gather together.

In places like Jordan, with a Muslim-majority population, days before Eid al-Fitr arrives they will hunt for gifts at local malls and Ramadan markets. They will prepare to exchange gifts on Eid

In Turkey and in places that were once part of the Ottoman-Turkish empire such as Bosnia and Herzegovina, Albania, Azerbaijan and the Caucasus, it is also known as, “Lesser Bayram” or “festival” in Turkey.

Eid al-Adha is a feast of sacrifice. Eid al-Adha is also known as a major holiday, the time is when Muslims perform the Hajj pilgrimage in the holy city of Mecca in Saudi Arabia. Hajj itself for Muslims is obligatory once in a lifetime for those who can afford it.

Eid al-Adha as a day commemorating the story when Allah SWT ordered Prophet Ibrahim AS to sacrifice his son Ismail as a test of faith.

The story, as narrated in the Qur’an, describes Satan’s attempts to tempt Abraham into disobeying Allah’s commands.

However, Ibrahim remained unmoved and instead told Ismail about the order and Ismail was willing to be sacrificed.

When Prophet Ibrahim made up his mind to kill his son, Allah sent an angel to immediately replace Ishmael with a ram.

For this reason, Muslims make sacrifices on Eid al-Adha as an effort to remember the sacrifice of Prophet Ibrahim who submitted to Allah’s commands.

When is Eid al-Fitr and Eid al-Adha celebrated?

What is the Spiritual Meaning of Eid?

Eid al-Fitr marks the end of the fasting period of Ramadan. The spiritual meaning contained in it apart from reflection and joy, Eid is also a time for charity, known as Zakat al-Fitr.

Eid is meant to be a time of joy and blessings for all Muslims and a time to share one’s wealth with those who cannot afford it.

The Qur’an says, “Believe in Allah and His Messenger, and give charity from (the substance) that Allah has made you an heir. For those of you who believe and give charity – for them is a great gift.”