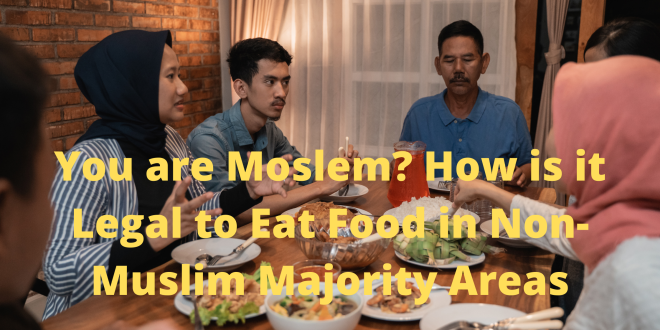 You are Moslem? How is it Legal to Eat Food in Non-Muslim Majority Areas

You are Moslem? How is it Legal to Eat Food in Non-Muslim Majority Areas – Not all types of food that are in a non-Muslim environment are forbidden to be consumed. Share: One of the obstacles that a Muslim often experiences when traveling in an area where the majority of the population is non-Muslim is that he is often confused when looking for halal food. Many tourists prefer to bring their own lunches from home so that they are not confused when looking for food in the area they visit, so as to avoid doubtful food or even haram food.

So what exactly is the law on consuming food in areas where the majority of non-Muslims are? Are all the food there directly included in the category of food that is haram? Or is there a gap to get halal food?

Previously, it should be noted that not all types of food in a non-Muslim environment are forbidden to be consumed. The type of food that influences the determination of halal-haram related to one’s religion is only limited to animal meat that goes through the slaughter process. Apart from that food, the law is the same, whether it is processed by a Muslim or a non-Muslim.

People of the Book referred to in the above word refers to the followers of Judaism and Christianity. Regarding the details of the categories of Jews and Christians whose slaughter is lawful, there are differences of opinion among the school’s scholars. These differences are generally summarized in the following references:

Banyak diminati:  what is Eid al-Fitr? Here is What you need to know about Muslim holidays

It means, “What is meant by the People of the Book in the chapter on slaughtering animals are Jews and Christians, whether from the dhimmi or harbi disbelievers, whether male or female, whether free or still slaves, (the people of the book) do not include the magi.

Likewise, Christians we know that their ancestors embraced Christianity after the Prophet Muhammad was sent, so their slaughter is not lawful either. Because embracing religion after the sending of apostles who revise their previous beliefs is not accepted so they are classified as apostates.

Meanwhile, according to Ibn Taimiyah, a person’s status as a book or not is a dzatiyah oracle, not based on lineage. So everyone who believes in the Religion of the People of the Book, then he belongs to their group. Both his parents and ancestors embraced the Religion of the People of the Book or not, whether they embraced him in that Religion after a revision of Religion or changes or before. This opinion is the opinion clearly affirmed by Imam Ahmad” (Kuwait Ministry of Waqf and Religious Affairs, Mausu’ah al-Fiqhiyyah al-Kuwaitiyyah, Juz 21, p. 185)

With reference to the above reference, the opinion that is relatively light and can be practiced by the wider community is to follow the views of the Imam Ahmad bin Hanbal school of thought which generalizes the understanding of the scribes to all Jews and Christians without considering the historical aspects of their ancestors.

Thus it can be understood that if the majority of the population of an area that is predominantly non-Muslim are Jews or Christians, then their slaughtered food is considered lawful for consumption by referring to the opinion of Imam Ahmad bin Hanbal.

It is different when someone is in an area where the majority of the population is non-Muslim who are not People of the Book, then consuming their slaughtered meat is considered haram.

Likewise, it is forbidden to eat meat that is in the area and the person who slaughters it is not known, because in this case the meat is very likely to be slaughtered by non-Muslims who are not People of the Book. These provisions are as described in the following references:

Thus, it can be concluded that food other than meat there is no difference in the status of halal-haram when in an area where the majority of the population is non-Muslim, unless the food is in essence classified as unlawful food such as khamr, or classified as food that is originally halal but is processed with unclean objects. , for example rice cooked in an unclean cup.

Meanwhile, animal meat that is slaughtered by non-Muslims of the People of the Book (Jews and Christians) or meat that does not know who the slaughterer is and is in an area where the majority of the population is people of the Book, then it is lawful to eat according to the opinion of the school of Imam Ahmad bin Hanbal, unless we know directly that the meat is not slaughtered by them according to the provisions of syara’ (severing the hulqum {breathing tract} and mari’ {food channel}), for example by strangulation, injection or other means other than slaughter, then in such circumstances the meat is legally forbidden to be consumed. Wallahu a’lam.